"In Christ" (in Colossians and Philemon) 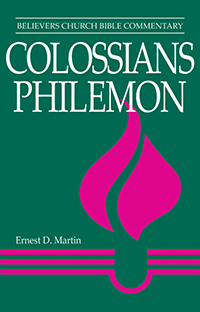 The expressions "in Christ" and the variations "in him/ whom" and "in the Lord" appear extensively in Paul's writings, some two hundred times. This wording is exclusively Pauline, although the concept is found elsewhere in the NT, notably in Jesus' words in John 15:4-­10, "Abide in me. For Paul, this expression became a code phrase for the new life which God makes possible through Jesus Christ.

In Colossians, in Christ (and the variations) occurs nineteen times. In chapters 1-­2 we find in Christ, and in 3­-4 in the Lord. The meaning of the phrase is not the same in all cases. In about two-­thirds of the occurrences, the words fit the Pauline pattern of using in Christ as a code phrase for the new life. A slightly different meaning comes with in him in 1:16­-17, 19; and 2:9.

We need to bring several related phrases into the picture. The concept corresponding to in Christ is Christ in you (1:27), or as expressed in Jesus' words, "I in them" (John 15:4­7). The peace of Christ . . . in your hearts (3:15) and the word of Christ . . . in you (3:16) are similar expressions. The in Christ side of the experience is matched and balanced by the Christ in you side.

The other related phrase, also found in Colossians, is with Christ. Although it is not a code phrase to the extent that in Christ is, both phrases convey overlapping concepts. Note the implied contrast between being in Christ and in the world in 2:20, expressed in NASB: If you have died with Christ . . . why, as if you were living in the world, do you . . . ? In addition Paul used fourteen compound words beginning with sun, the preposition translated "with." Three of them are found in Colossians (EDM), co-­buried (2:12), co-raised (2:12; 3:1), and co­-quickened (2:13). The phrase with Christ conveys an intimate union, a personal identification with Christ.

The unfolding picture is this. By identifying with Christ in his death and being raised with him to newness of life, the believer comes into a relationship with Christ which Paul labeled as in Christ. The experience transcends the limitations of physical, spatial perceptions, especially when the matching experience of Christ in you is included. Although the experience has something of a mystical quality, several elements can be identified.

In Christ speaks of connectedness, of a vital union, best thought of in a dynamic rather than a static sense. Faith and obedience are as much a part of the experience as security. In Christ designates a sphere of identity. Through being in Christ the Person, humans experience the potential of personhood themselves. Paradoxically, a person in Christ is not absorbed into nonexistence, but enters into a realization of being in the image of God.

Not to be missed is the inseparableness of being in Christ and being in his body. Except when misread through the colored glasses of an assumed individualism, the NT texts explicitly and implicitly place the in Christ experience in a community setting. The corporate dimension should automatically come to mind when the code phrase in Christ is encountered.

Finally, being in Christ encompasses both present and future experience. With Christ is often used with a future reference, as in 3:4. Both expressions also serve to define and shape the believers' here-­and-­now life, with an unbroken continuity on into ultimate future blessing.