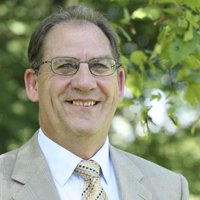 August H. Konkel is professor of Old Testament at McMaster Divinity College in Hamilton, Ontario, and president emeritus of Providence University College and Seminary in Otterburne (2001–2012). He began work at Providence in 1984 as professor of Old Testament. His publications include work as a translator for the New Living Translation (NLT), a contributor of notes for the Study Bible of the NLT in Chronicles, and notes for the Study Bible of the English Standard Version of Job. He was a contributor to lexical and theological articles in the New International Dictionary of Old Testament Theology and Exegesis (Zondervan). He has published Job in the Cornerstone Biblical Commentary series (Tyndale House) and 1 & 2 Kings in the NIV Application Commentary (Zondervan). His scholarly research includes published articles in the area of literary and textual criticism of the Old Testament.

Konkel was ordained in what is now known as Mennonite Church Canada in 1972. He served as pastor of the Bethel Bergthaler Mennonite Church in Winkler, Manitoba, from 1971 to 1982. He lives in Paris, Ontario, with his wife Esther. They have four adult children, who have made their homes in Ontario, England, and Guatemala, and eight grandchildren.