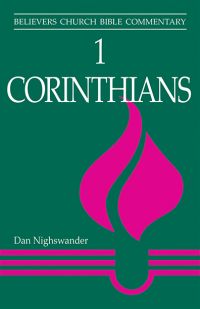 First Corinthians is all about the church. It is addressed to the church of God that is in Corinth (1:2). In English translations, the word church occurs some twenty-two times in this letter, where it represents the Greek word ekklēsia. In this commentary, however, church is rarely used. It would be misleading for readers. Over a century ago, Fenton J. A. Hort (1) identified the problem: The English term church “carries with it associations derived from institutions and doctrines of later times, and thus cannot at present, without a constant mental effort, be made to convey the full and exact force which originally belonged to ekklēsia.” There were no dedicated Christian buildings in the first century, and there were no religious institutions with constitutions, creeds, property, and leadership hierarchies. These are assumed in most people’s understanding of church, and if we bring that perspective to our reading of 1 Corinthians, we will misunderstand it.

Ekklēsia is used often in Greek literature to denote a political gathering, an assembly of citizens or political officials (e.g., Acts 19:32, 39, 40). Other gatherings could also be called ekklēsia. The word always referred to the assembled group, not the meeting place. In Jewish literature, the Septuagint uses ekklēsia to refer to assemblies. Moses talks about gathering at the foot of Mount Sinai as “the day of the assembly” (Deut 4:10; 9:10; 18:16), and subsequent gatherings of the people are called assemblies (ekklēsia) (e.g., Deut 31:30; 1 Kings 8:14). Both the Jewish and the Greek uses of this familiar term influenced Christians to adopt it for their assemblies.

There is no concept of a universal church in 1 Corinthians, and certainly not of an invisible, idealized, heavenly mystery. There are only local assemblies of believers who gather in household groups for worship, fellowship, and mutual support. They recognize that they are connected with similar assemblies of Jesus-followers wherever they are located. The ekklēsia is primarily the household group, but with hints of the larger affiliations.

In the hope of reducing confusion and challenging misperceptions, this commentary avoids the use of church to refer to the Christians in Corinth. Instead, we have used words like saints, body, household, brothers and sisters, congregation, community of faith, believers, and assembly. Church is used in quotations from the text or from other commentators.

In the sections titled “The Text in the Life of the Church,” which are prescribed by the commentary series, the word church is appropriate because the discussion is about the institutions that have developed over the intervening twenty centuries and that continue to represent the Christian movement.