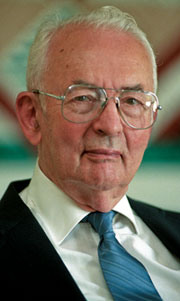 For over sixty years Erland Waltner, the writer of the commentary on 1 Peter, served as pastor, Bible teacher, preacher, church conference leader, and administrator in church institutions and agencies. He grew up on a farm near Freeman, South Dakota. Upon baptism, he became a member of the Salem Mennonite Church. Waltner graduated from Bethel College, North Newton, Kansas, in 1935. He finished his pastoral training at the Biblical Seminary in New York in 1938, and then at his home church was ordained for leadership ministry.

He was married to Mary Winifred Schlosser, daughter of missionaries to China, and they are active members of the Hively Avenue Mennonite Church in Elkhart. They are richly blessed by four daughters: Mary, a psychiatric social worker in San Diego; Irene, a public school teacher in Elkhart; Kathy, a professional counselor at the University of Guelph; and Rose Elaine, an ordained chaplain in eastern Pennsylvania. Waltner passed away in 2009.