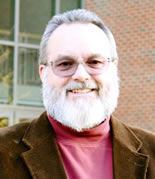 J. E. (Jay) McDermond was born and raised in rural central Pennsylvania. At age eighteen he was converted at a Dave Wilkerson rally in Harrisburg, Pennsylvania, and the following year he enrolled at Messiah College, Grantham, Pennsylvania. He first learned of Anabaptism there, and was surprised to learn that other Christians also held to a "peace position." He is quick to note, however, that he is a "pacifist by choice, not nature." He came to this conviction through reading the Sermon on the Mount.

Upon graduating from Messiah College (1976), Jay attended Mennonite Biblical Seminary, Elkhart, Indiana, and earned his M.Div. in 1979. After serving as the pastor of the Nappanee Brethren in Christ Church, Nappanee, Indiana (1979-1982), he studied at the University of Durham (England) and was awarded a M.Litt. in 1989. He received his D.Min. degree from Pittsburgh Theological Seminary, Pittsburgh, Pennsylvania (1998).

In addition to serving at the Nappanee BIC Church, Jay had a "lay pastoral" role at the Roseglen Brethren in Christ Church (Duncannon, Pennsylvania, 1975-1976) and was the youth pastor at the Pine Street Presbyterian Church (Harrisburg, Pennsylvania, 1974-1975). He also served as the pastor of the Clydebank Central Church, Clydebank, Scotland (2001-2002). Ordained as a Brethren in Christ minister with special assignment at Messiah College, he has taught there since 1987. He is the Professor of Christian Ministry and Spirituality. He has also taught at England (Sunderland Polytechnic, 1984-1985) and Kenya (Daystar University College, 1992-1993).

Jay and his wife, Wanda Thuma-McDermond, are members of the Grantham Brethren in Christ Church. In 1981-1982 he served as a board member of Mennonite Central Committee, Great Lakes. He has also provided pulpit supply for a number of congregations facing senior pastor interims. McDermond has written many essays, article, and book reviews for both scholarly and popular publications. This commentary is his first book.

Jay and Wanda have two children, Malcolm and Duncan. Both sons are competitive swimmers, and so he spends considerable amounts of his time around swimming pools. He also enjoys reading novels and crime fiction by British writers and watching English Premier League Football (soccer): "H'way, Newcastle!"