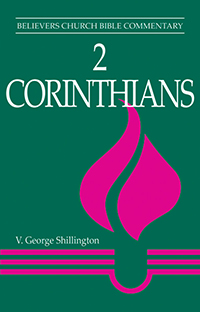 Paul mentions the figure of Satan at three points in 2 Corinthians. At 2:11 he counsels the congregation to forgive the wrongdoer in order to avoid the tricks of Satan. At 11:14 he characterizes his opponents as ministers of Satan disguised as ministers of righteousness. At 12:7 he views his thorn in the flesh as a messenger of Satan to keep him from being too elated. Satan is also connected with the name of Beliar, in the inserted text of 6:14—7:1 (cf. Jub. 1:20; Test. Dan 1:7: 3:6; Fitzmyer, 1971:205­217, on Dead Sea Scrolls).

Paul inherited his view of Satan from his Jewish tradition. The Greek term (Satana) is a carry­over from the Hebrew (ha)-­satan. The Greek version (LXX) rarely uses this term. When it does, the meaning denotes an adversary on the earthly plain, as in 1 Kings 11:14, where Hadad of Edom is Solomon's adversary (satanas; cf. Sirach 21:27). The sense is that the adversary is like an accusing prosecutor in a court (TDNT, 2:73). Where the archenemy of God is in view, the LXX renders (ha)-­satan with the Greek ho diabolos. This Greek term, like its Hebrew counterpart, (ha)-­satan, denotes an evil figure opposed to the will of God, and standing again like a prosecutor in God's court (TDNT, 7:151­163). Depending on the context, such a figure could be called in English: Accuser, Adversary, or Devil. This is the same figure that provoked David to number Israel (1 Chron. 21:1); Job suffers under his power (Job 1:6—2:7); the same Satan resists the high priest in the reestablishing of the remnant in Israel (Zech. 3:1; cf. Ps. 109:6). In each of these instances in the OT, the Satan figure is not a demon of the underworld totally separated from the court of the Lord. On the contrary, Satan is seen in the same judicial assembly with the Lord, discussing the destiny of the people of God in the world. Satan's chief aim in these texts is to oppose the Lord of Israel (TDNT, 2:73­75).

This sinister yet lordly figure appears under other titles in the OT. One of the less ­notable references to the rival of God appears in the priestly text of Leviticus 16 under the name Azazel (traditionally translated "scapegoat"). Here Aaron the priest presents a goat to the Lord and another to Azazel. He puts the sins of the people on the goat dedicated to Azazel. That goat is led out of the camp into the desert and handed over to Azazel for destruction, to rid God's holy community of its iniquities. In later Judaism, this figure of Azazel became identified with the arch opponent of God, otherwise known as Satan (Grabbe: 152f.).

Another name for the figure opposed to God occurs at Isaiah 14. In that prophecy the figure comes through as a high angelic being under the name "Lucifer" (KJV), meaning "Day Star, son of the Dawn." Embodied in the evil king of Babylon, his ambition in Isaiah 14 is to raise his throne "above the stars of God" and to make himself like the Most High (14:12­14).

How do Paul's images of Satan in 2 Corinthians match these from his Scripture? Taking the name Belial/Beliar first, the rhetorical questions of 2 Corinthians 6:14­16 assume that those who participate in Beliar bear his image, just as the participants in Christ bear the image of Christ. A person cannot participate in both at the same time (cf. 1 Cor. 10:21). This image is consistent with the prevailing notion from the OT that Beliar has his offspring. who do his will by nature.

Second, the beguiling character of Satan in the OT comes through in every reference in 2 Corinthians. Forgiveness prevents the kind of outwitting tricks Satan played on David (2:11). Satan's ministers opposing Paul are in disguise to deceive the Corinthians: they are in league with Lucifer, the Day Star, an angel of light (11:14­15) who opposed God and fell from heaven (Isa. 12:14).

Finally, Satan torments Paul with the thorn in the flesh to keep him from being too elated (2 Cor. 12:7). This characterization of Satan carries a mild echo of the story of Job, who suffered at Satan's hand but was ultimately acquitted and restored.

The Azazel figure of the scapegoat tradition does not appear anywhere in 2 Corinthians, though it probably does lie behind 1 Corinthians 5:5. In that context, Paul consigns the incestuous man to Satan for the destruction of the flesh so that the spirit may be saved in the day of the Lord. Here the echo resembles the figure of the destructive desert demon, Azazel, under the name Satan (see further in V. George Shillington, "Atonement Texture in 1 Corinthians 5.5”, JSNT (January 1999), 29–50; also Caird, 1994:107­–111).