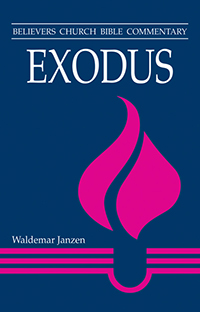 How did we get our present canonical text of Exodus? Various features of it suggest that it was not written by one author. These features include abrupt changes of scene, mood, and style; inconsistent uses of names, such as Horeb and Sinai for the same mountain; vocabulary characteristic for some sections but not for others; and other features [Narrative Technique]. Early Christians took over the rabbinic tradition that Moses wrote the whole Pentateuch (the "Five Books of Moses"), but the Pentateuch itself does not make that claim, and it is not supported by the textual features just mentioned. By way of a cautious comparison, one might say that Moses' relation to the Pentateuch (including Exodus) is somewhat like that of Jesus to the Gospels. Both are figures that dominate the story; both have or may have done some writing, but both are "authors" of the respective works in the sense of giving the impetus for their shaping, rather than in the sense of writing them from start to finish.

How then did our Exodus text come about? For over a century and a half, the so-called Source Theory or Hypothesis (formerly also called the Documentary Hypothesis) has appealed to many scholars. It can vary greatly in its particulars, but its common core may be summarized as follows: Israel's experiences with God, or some of them, were at first handed on orally, both as stories told from generation to generation and as cultic texts, those used in religious celebrations. What was told, and how it was told, varied from place to place, or sanctuary to sanctuary. As stories and cultic texts were gradually combined to form larger units, four major strands or versions emerged:

1. The Yahwist Source, abbreviated as J for Jahwe, the German spelling of Yahweh. This is understood to be a version of Israel's story possibly originating in the South or Judah, perhaps in the tenth century BCE. It is marked by its own vivid storytelling style, with its own characteristic vocabulary choice. One prime example is using Yahweh (Eng.: LORD) for God even before God's revelation of this name to Moses.

2. The Elohist Source, named on the basis of its use of Elohim (’Elohim) for God prior to God's revelation of the name Yahweh to Moses, and abbreviated as E. This source may have emerged in the North, or Israel, perhaps in the ninth century BCE. Again, it has its own style and its characteristic vocabulary.

3. The Deuteronomic Source, basically found in the book of Deuteronomy, and therefore abbreviated as D. It may have originated in the seventh century BCE. Its characteristic style and vocabulary are easily recognized even by lay readers of Deuteronomy. Some "Deuteronomic" passages are also found in Genesis—Numbers.

4. The Priestly Source, abbreviated as P, may have originated in the sixth or early fifth century BCE. It is marked by an interest in questions of cultus (worship), ritual, genealogy, and other matters of priestly concern, often discussing these at great length and in a systematic manner.

In the course of centuries, many scholars believe, these sources were woven together—with the exception of Deuteronomy—to form one story, much as we weave the four Gospels together into a continuous story of Jesus. Scholars still debate whether the shaper(s) of the Priestly Source were at the same time responsible for incorporating the earlier sources, or whether the Priestly Source had its own independent existence for a time and was then joined to the others by later editors. It is widely held that this process of source combination was completed by the time of Ezra (ca. 400 BCE), and that "the book of the law of God," on the basis of which Ezra ordered life in Jerusalem, was essentially a copy of our Pentateuch (cf. Neh. 8).

It is important to remember that this Source Theory is a hypothesis, a proposal for explaining and making sense of various textual features that would otherwise remain baffling. Its proponents disagree on many aspects and details of it. In the last two decades or so, the hypothesis as such has been subjected to severe criticism and/or revision. However, no other proposal to explain the emergence and nature of the Pentateuch (including Exodus) has thus far been able to gain an equally widespread acceptance.

Many interpreters have, however, shifted their interest and effort from pursuing these questions of the text's prehistory to interpreting the final canonical text. In our interpretation of Exodus we have also given our major attention to an understanding of the text as it stands, and as it was canonized—declared as having unique authority—by Israel and the early Christian church. It is my conviction that this final text did not come about through a haphazard merging of earlier sources, although earlier sources must have been used, but was carefully constructed to form a coherent and meaningful whole under the guidance of the Holy Spirit.

Nevertheless, some features of the text of Exodus become more understandable when we realize that its final shaper(s) did not impose uniformity of style, mood, and vocabulary on it, but arranged into loose story sequence such materials as they had received through a long history of tradition. The final shaper(s) or editor(s) approached their task with a mentality quite different from ours in at least one way: While our concern tends to be to harmonize apparently jarring elements, such as the differences between the four Gospels, ancient editors were concerned to preserve the variety of forms in which they had received their materials.

I have included this account of the Source Theory in order to help us understand better such diversities, abrupt changes, and generally the uneven flow of our Exodus story [Narrative Technique].