The Interpreting Community of Faith (in Ruth/Jonah/Esther) 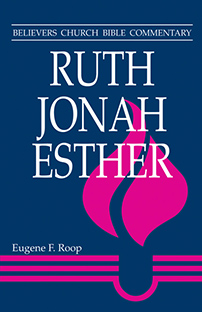 Throughout history the Christian church has entrusted the interpretation of Scripture to various individuals or groups. The Roman Catholic Church has looked to the priests, bishops, and members of the Catholic orders for an authorized interpretation. These clergy depend on traditional Catholic doctrine for interpretive direction. The papacy has remained the guardian of true doctrine. While traditional doctrine in Roman Catholicism establishes interpretive parameters, it allows Catholic scholars a great deal of freedom to study the Bible and creatively explore its narratives, poetry, and accounts.

The Reformed Protestant tradition has emphasized the role of scholars to “rightly” interpret the Word of God (2 Tim 2:15). While traditional creeds may play a role, these academics in the Reformed tradition have insisted that the Bible, as carefully interpreted, should take precedence over traditional church doctrine in Christian faith and action. This perspective, grounded in its commitment to an educated clergy who interpret the Bible within the congregation, was responsible for founding most of the earliest seminaries and divinity schools in North America.

The believers church approaches biblical study differently from either the Roman or Reformed tradition. Although valuing both traditional doctrine and educated scholars, these groups have lifted up the importance of the individual believer and the faith community in biblical interpretation. The Pietistic heritage has encouraged the individual to read the Bible, prayerfully expecting the Holy Spirit’s presence to give meaning and message. Pietism has recognized the interpretive role of each believer, whether one was an academic, a member of the clergy, or a lay member.

The Anabaptist heritage has reminded the individual that each one must always be in conversation with the believing community to validate the meaning and message of the Bible. The Anabaptists have talked about the Spirit’s presence where two or three (or more) gather to study the Bible and pray (cf. Matt 18:19-20; Acts 15:28).

The believers church tradition has recognized that the process of biblical interpretation is never complete. Therefore, neither creedal doctrine nor academic commentary can finally determine the interpretation of Scripture. Each generation is entrusted with the Bible and charged with the responsibility to prayerfully and carefully interpret the text for its time, respectful of tradition and attentive to the Spirit. This has made believers church groups rather reluctant to write commentary, remembering that, in the past, commentary has often been used to codify a single interpretation that was then used to criticize and even to persecute dissenters.

The absence of a single orthodox interpretation, however, has never meant that all interpretations are equally true and beneficial. Interpretation can destroy as well as construct. Christian history, from ancient times until this day, illustrates the frequency with which individuals and communities can use an interpretation of the Bible to initiate violence, authorize slavery, or justify discrimination. Individuals are not free to define the meaning of a biblical text apart from the church that transmitted the Bible (Bird: 63). For that reason the believers church tradition encourages all voices in the community, past and present, to offer their best understanding, creating a conversation within the interpreting community. Out of that conversation concerning the Bible’s meaning and message, the believers church community anticipates a transformed people rather than a single orthodox interpretation.