Violence and War in Judges 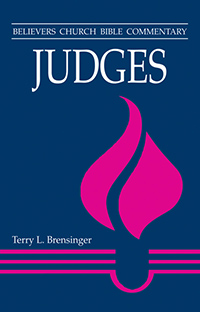 For even the casual reader of the book of Judges, violence and killing seem to loom on every page. In the first chapter, the writer presents an extensive catalog of the Israelites’ many military opponents. In the closing chapter, war and the annihilation of human beings continue unabated. Much of the same goes on throughout the intervening chapters as well. Just as in various other OT books, violence and war play a major role in Judges.

It is hardly possible to resolve all of the tension that this language of violence and war raises for many people, including Christians who take seriously Jesus’ words about loving one’s enemies (Matt 5:44). Nevertheless, it may help to put such language in the following context:

Problem of Assimilation. Throughout the book of Judges, the Israelites are repeatedly accused of coming to terms with the Canaanites. In so doing, they establish ill-conceived covenants, leave standing foreign shrines and idols, intermarry, and indeed embrace a great deal of Canaanite culture and religion (2:2, 11–12, 19; 3:7; 10:13). Significantly, however, the writer of Judges neither specifies the need to terminate the land’s inhabitants nor condemns the Israelites for failing to do so. Instead, he makes clear that the Israelites’ glaring crime involves intermingling and compromising; they failed to drive out the Canaanites. Whether or not there were solutions other than annihilating the “enemy” remains an open question.

Sources of Violence. A great deal of the bloodshed in Judges has nothing whatever to do with God. Instead, it continually grows out of a multitude of human emotions and ambitions. Both Gideon (Judg 8) and Samson (15:7–8) act violently to attain personal revenge. Similarly, Abimelech crushes countless people in attempts to satisfy his unquenchable thirst for power (Judg 9), and Jephthah destroys a multitude of Ephraimites out of deep feelings of resentment (12:1–6). Finally, the Israelites collectively commit untold atrocities while searching for solutions to self-instigated problems (Judg 21). In none of these cases does the Lord genuinely instruct or subsequently praise such activities. On the contrary, these warlike adventures are humanly designed and initiated.

Reverse Aggression. Not only do the Israelites initiate violence against their enemies, but they similarly receive it in return. Such reversed aggression regularly appears in Judges as an act of God in response to his people’s constant unfaithfulness. Warfare in the book is not limited, therefore, to Israel fighting against the world. Instead, God at times uses warfare to judge his own people.

God’s participation in war, however, does not in itself imply that violence and war, whether against Israel or others, are sacred or even commendable activities. What it does suggest is that God works through the events of human history, including war. God can use even evil activities, individuals, and nations to accomplish his purposes on earth (Craigie, 1978: 41–43).

Nature of the Stories. People often read the Bible as though all of its parts are the same. They rarely take account of differing contexts and literary types. In the present case, the book of Judges consists largely of so-called hero stories (see the essay “Hero Stories” in the commentary). Elsewhere in the ancient world, such stories magnify the battlefield scenes themselves and heap virtually unlimited praise upon various heroic superstars. One need only read portions of the Iliad (Greek) or the Gilgamesh Epic (Babylonian) for examples. In Judges, while many characteristics of heroic literature appear, they are frequently “toned down.” Rather than lavishing human beings with ceaseless praise, various episodes depict God himself as the fighter and victor; the Israelites do little (Lind: 169–174; von Rad: 41–51). In the wars that God initiates, human strength and ingenuity fade in the light of God’s own miraculous works.

The Writer’s Overall Perspective. It must always be kept in mind that the period of the judges was hardly a time of fond memories for the writer. Indeed, later generations saw here little more than anarchy and increasing disobedience. The writer is therefore not casually recounting sordid stories to encourage his readers to “go and do likewise” (Luke 10:37). On the contrary, he typically assumes that the horror of much of the material will be self-evident.

The Canonical Context of the Book of Judges. The war narratives in Judges do not constitute the Bible’s final word on the subject of violence and war. Even in the OT, one senses a progression involving at least three major stages:

Throughout this progression, a progression beginning with narratives such as those in Judges, violence and war are increasingly critiqued. This critique leads the way to a more complete theology of peace based also upon the NT.