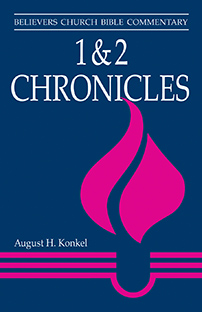 Chronicles is a history written to inspire hope for a kingdom of peace. The history from which the Chronicler derives his hope abounds in military conflict. War is imbedded in every stage of Israelite history; in Chronicles, however, war serves a particular pedagogical purpose. “Battle accounts in Chronicles serve primarily to establish, maintain, and legitimate a ‘historical’ norm of a united Israel at peace in their ancestral land under a Davidic monarch, with the proper priestly and Levitical personnel officiating at the Jerusalem temple” (Wright 1997: 175). This ideal depends on complete faithfulness to the Lord alone. Battle accounts in Chronicles conform to this ideal. Israel emerges in a land of peace. David fights against the enemies of Israel, and his reign ends in peace. But the price for this peace does not go unacknowledged. David is forbidden to build the temple, which represents the rule of God. David is a man of war who has shed much blood (1 Chron 22:8; 28:3). What is forbidden to David is mandated to Solomon, a man of rest/peace (22:9), as is implied in his name (šalom, peace; Šelomoh, Solomon). In Chronicles, war never touches Solomon or his kingdom. In Kings, Solomon is embroiled in war even within his own kingdom. Jeroboam, one of his most capable administrators, is forced to flee to Egypt (1 Kings 11:40), where he finds refuge with Shishak, the Egyptian pharaoh who later attacks Rehoboam (2 Chron 12).

Battle accounts serve a pedagogical purpose in Chronicles. The narrative moves to a kingdom of peace under a Davidic king. This kingdom is never exclusive of conflict, but it is protected from being destroyed by conflict. In Chronicles there is an exile of Transjordan, but no explicit Assyrian exile of the north. Sennacherib’s siege of Jerusalem results in Hezekiah’s prosperity. Jerusalem suffers one defeat under the Babylonians because of the people’s unfaithfulness. In this final defeat, not only Zedekiah but also the Jerusalem priesthood is implicated in being unfaithful (2 Chron 36:14). The defeat of Jerusalem is the converse of the kingdom envisaged by the Chronicler in every aspect: king, priesthood, temple, and people.

Warfare is divine judgment that destroys the kingdom. This is true for every military loss in Chronicles. The temple was destroyed; king and people were taken captive to Babylon. But the book does not end without hope for a kingdom of peace. Cyrus the Persian grants permission for Israel to return to Jerusalem, with a mandate to build the temple, much as David went up to Jerusalem to make provisions for temple building (2 Chron 36:22-23). The land has rest without the presence of a Davidic king, a temple, or priests and Levites.

The Chronicler’s account of history does not treat battles as individual and isolated events, but as general historical portrayals of different periods. Battle accounts in the genealogies portray a distinct and revolutionary concept of Israel as aboriginals in the land (Japhet 1989: 374–79). There is no conquest; the exile is limited to the Transjordanian tribes. The Chronicler’s narrative and a critically reconstructed history may at points converge, but the Chronicler has no interest in the impact of particular wars. The Chronicler seems to have had access to other traditions of the emergence of Israel. He uses them to portray Israel as having a divinely ordained redemptive role among the nations. According to Chronicles, David is a man of war, never fights a losing battle, never fights against fellow Israelites, and never engages in cruel military conduct. Saul’s demise comes at the hands of the Philistines because he was unfaithful. There are no wars between south and north in conflict with Saul as the northern king. David does fight offensive battles (1 Chron 18:1–20:8), expanding Israel’s realm, collecting tribute, and maintaining honor. Tribute received does not aggrandize David but supplies materials for Solomon’s construction of the temple. These wars are a preparation for the future kingdom. As David’s reign enters its final phase, warfare ceases completely. Most of all, there is no question about dynastic succession. Solomon has unqualified support, without any necessity of dealing with rivals such as are found in 1 Kings 1–2. The life of a man of war ends with Israel at peace, having every provision for worshiping God in his splendid temple, with proper priestly and Levitical personnel already appointed.

There are many battles subsequent to Solomon, at times involving Judah against the northern tribes. But there are occasions where prophetic intervention mitigates or prevents conflict. The speech of Abijah to the armies of Jeroboam is a prominent example (2 Chron 13:1-12). All of these are wars of defense. All are either punishment because of unfaithfulness or wars of divine victory for the faithful. None is more distinguished than the attack of Sennacherib against Hezekiah: "After all that Hezekiah had so faithfully done, Sennacherib king of Assyria came and invaded Judah" (2 Chron 32:1). Hezekiah makes all the proper military preparations, but the victory came about through the prayers of Hezekiah and Isaiah (v. 20). The divine agent liquidated the mighty Assyrian armies in a single stroke, with no human intervention.

The Chronicler never suggests that there is no need for an army or that soldiers may not be engaged in battle. But these are never relevant to the outcome; frequently the vastly superior army is defeated and disgraced, as with Sennacherib. Large military forces are a sign of God’s blessing for a faithful king, but they never have anything to do with military success. Military is engaged in every aspect of the divine kingdom. The registry of the priests in Jerusalem after the return summarizes by saying they were "one thousand seven hundred and sixty mighty warriors (gibbore ḥel), doing the work of serving in the house of God" (1 Chron 9:13 AT). John Wright shows that the Chronicler uses the term ḥyl exclusively with a military sense (Wright 1990: 70–71). Even when the military context is not explicit, as in this reference, the sense is not exclusive of military. While these are described as capable priests, the description chosen by the Chronicler aligns them with his concept that these are warriors in service of the temple. Although the names are largely drawn from Nehemiah 11:10-14, the description of the priests as warriors doing the work of the temple is unique to Chronicles. Such metaphors are natural to his work. Thus in the days of Jehoshaphat, a Levite rallies the troops against the Moabite coalition (2 Chron 20:14); and a Levitical musician adorned in sacred garments leads the soldiers into battle (v. 21). Military is as integral to the work and praise of God as any other aspect of the kingdom.

Israel is not conceived as a state, with various functions of government. It is a nation gathered to be the kingdom that God has ordained. They function in a temporal world, but they do not function as the temporal world. There are no military lessons to be learned from the Chronicler, nor is there a military history. There is no point in trying to reconstruct the influence of the military in the fortunes of the nation. Military is part of divine activity. Susan Niditch suggests that Chronicles provides an “extended critique of human participation in the violence of war and a potential for an ideology of nonparticipation” (Niditch: 139). But the Chronicler does not shrink from human engagement in war as part of God bringing about the kingdom. Nor can war be reinterpreted as part of liturgical acts, as holy war has sometimes been defined. In Chronicles, war is a part of history and endemic to human society. But in his view, humans do not determine the destiny of society, and therefore human warfare does not determine the fortunes of God’s kingdom, as it does for all other kingdoms.

The Chronicler’s view of war is not comparable to other biblical literature. In the Deuteronomistic History, warfare has much more of the usual aspect of human conflict, amid political opportunism and struggle. In apocalyptic writings, warfare belongs to God, with the primary focus on a cataclysmic final battle that ends all wars. In the New Testament, control by coercive force for the sake of maintaining peace and order is to be recognized as the responsibility of government (Rom 13:1-7; 1 Pet 2:13-17). Christians are exhorted to submit to these powers, to show them respect, and not to revolt against them. Revolt was the tendency of many Jewish sects in New Testament times, resulting in Jews being expelled entirely from the very city they considered sacred. Followers of “the [Jesus] Way” were not to have any part of that kind of attitude toward war. In the view of the Chronicler, rest and wealth will come to Jerusalem once the proper institutions are established, as a result of international fame when the Lord delivers Jerusalem from all its foes. This is predicated on exclusive fidelity to God, in part by supporting the whole temple structure. This never happened in the Chronicler’s day, and it is not clear how his thinking may have influenced later understandings of war, such as the Hasmonean battles, the Qumran ideology, or apocalyptic thinking. The Chronicler’s view of the role of war in God’s program is open to the future, much like the rest of his eschatology.

Several points are clear for the Christian. Life must be lived for the kingdom of God. Each individual has only one life to give; such an ultimate sacrifice must be worthy of serving the kingdom of God. If the Chronicler has a theology to be followed, it is that human warfare does not determine the destiny of human society. Reliance on the power of military has been the way of power in this world, but the kingdom of the Christian is not of this world. A third point is that it is the responsibility of human government to protect its citizens from violence (Gen 9:6). Though government is faulty, often being the beast that tramples its own people, it still is the temporal means of restraining society from anarchy like that of Lamech (4:23-24), which leads to universal destruction like that of the flood (6:5). Unlike the times of the Chronicler, the nature and mission of the church is such that it has no direct engagement in temporal rule. Historically, when such powers have been possible, the result has been nothing short of complete disaster.

But the church does have a role in instructing individual citizens of the kingdom on the complicated ethical decisions they face in particular places and circumstances. In modern times, these issues have changed extremely rapidly. Technology has made engagement in warfare a matter of machines destroying people in an increasingly remote manner. Chronicles has little to contribute directly to such ethical deliberations. The contribution of Chronicles is more philosophical and theological. Citizens of the kingdom must make fidelity to God and service in praise to his name their fundamental priority at all times. God wins wars on behalf of those faithful in service to him. God will end all human wars in the fullness of his King and kingdom.